Pseudo Classes are the best way to handle on/off state changes in a Node in JavaFX. But it’s very badly explained in the JavaDocs and hard to understand. This article should clear that up.

Have you ever noticed how a Button changes a little when you hover your mouse over it? Or darkens to look like it’s pressed down when you hold down a mouse button in it? These presentation changes are usually accomplished through the use of PseudoClasses.

There are a number of predefined PseudoClasses in JavaFX that you can use without any special programming. For instance, many controls have a disabled pseudo class which is automatically maintained for you whenever the control’s Disabled property changes.

You can override these in your own stylesheets to make the control behave differently when it’s disabled.

The built-in PseudoClasses are useful, but sometimes you need to create your own PseudoClass to handle state changes in ways unique to your application. For instance, you might want to change the colour of a Label if the data it displays indicates an error condition.

This article is about how to create a brand new PseudoClass and how to link it into your screen Node so that you can style it via your CSS.

The JavaDocs for Pseudoclass are Horrible

If you want to look, you can find them here.

Note that if a node has a default pseudo-class state, a horizontal orientation for example, pseudoClassStateChanged should be called from the constructor to set the initial state.

The following example would allow “xyzzy” to be used as a pseudo-class in a CSS selector.

Yikes! That doesn’t really explain anything unless you already understand it.

And then they’ve included the following example code:

Seriously, I don’t think this is a great way to explain how it works. They’ve even called it magicProperty, which might be an admission that they understood they weren’t explaining it very well when they wrote it.

MyControl.this isn’t defined anywhere, but it appears that this snippet of code is supposed to be embedded into a class which is an extension of Node. The idea being that this class now exposes a BooleanProperty through magicProperty() that the layout can then bind to some other property to control the PseudoClass.

Also, there’s a typo (which I’ve fixed here) in the call to pseudoClassStateChanged(). That doesn’t help either.

How Does it Really Work?

In reality, PseudoClass is a lot easier to understand than you might think. There’s no magic, and it’s really easy to use PseudoClass.

In the example code from the JavaDocs, the first part that’s really important is the single line:

What does this do?

It does two things, one you can see, and one that you can’t.

The first is to create an instance of PseudoClass as a static field. Does it need to be static? Technically, no, but as we’ll see in a little bit, it’s probably a good idea to implement it this way.

The second thing it does, which you cannot see, is that it updates a static Map deep inside PseudoClass, adding whatever name you used to initialize your PseudoClass - in this case, “xyzzy”. The Map makes sure that only one element with the same name exists in your application.

If you try to instantiate another PseudoClass anywhere in your application with the same name, it will just reuse the Map entry it already has for that name. That’s not really a big deal, but you should avoid using names that are already defined in JavaFX, like “hover” or “disabled”, because there might already be code that’s going to be manipulating any PseudoClasses with that name.

The only other part of the example code you need to understand is this:

Even this is too complicated. You could use something like this:

What does this do? pseudoClassStateChanged() is a method in Node. You pass it a PseudoClass, and a new value (true or false) for that PseudoClass in that Node. Under the hood, this method then adds or removes this PseudoClass to its list of active PseudoClasses. In reality, this list is really just a list of the names that were given to the PseudoClasses when they were instantiated.

Important Things to Know About PseudoClass

It’s probably a bit inefficient if it’s going to be called a lot, just because there’s a fair bit of code running inside of PseudoClass.getPseudoClass(). So it might be best to declare it as a static field inside of whatever class holds this code.

Connecting PseudoClasses to Properties and Bindings

We’ve seen that PseudoClasses are just normal Java and are implemented through normal imperative programming techniques. But if you want to build a reactive JavaFX application, then you need to control the PseudoClasses through Properties and Bindings.

How do you do that?

The way to connect imperative code to Properties is through Invalidation Listeners. This is exactly what the example from the JavaDocs does, although it does it in the most complicated way possible.

Essentially, what an Invalidation Listener does is to define a block of code that will run whenever the system decides that the value held in a property is no longer valid because it’s potentially been changed, or some other properties that it’s been bound to have changed. Calling get() on the Property will cause it to recalculate it’s value, but you can also run whatever other code you want in the Listener. This is where you can call Node.pseudoClassStateChanged().

The Property that you’re listening to can be anything, anywhere. It doesn’t need to be a field in the Node, and it doesn’t need to be a BooleanProperty either. The Listener just needs to be defined in some scope that has access to both the Node and the Property. The Listener would then contain whatever logic you need to turn a change in your Property value into a boolean value to be sent to Node.pseudoClassStateChanged().

In this example, we’re going to look at the “normal” use case for PseudoClass, a BooleanProperty which is part of the Model and which is connected to a PseudoClass through an InvalidationListener:

Here’s the CSS file for this: 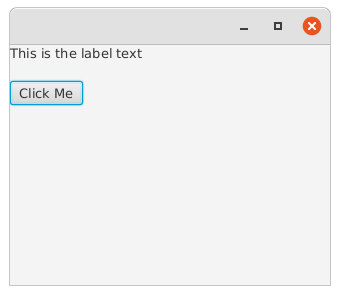 After the Button is clicked, it looks like this: 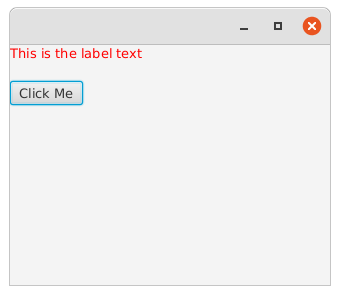 I think this strips virtually all of the mystery out of PseudoClass creation. It is possible to cut the BooleanProperty completely out of this if you want and call label.pseudoClassStateChanged() directly from the Button action - although this is not a good idea in terms of creating a Reactive JavaFX program:

Once again, this isn’t a good practice. It’s included here just to show how PseudoClass is just regular Java code.

At this point, we’re not really talking about PseudoClass itself any more, but about strategies around transforming non-boolean Properties into CSS pseudo-class changes.

Let’s look at how to turn a StringProperty into pseudo-class states:

And the CSS file:

Which looks like this when the “Warning” button is clicked:

The InvalidationListener just turns off all of the custom PseudoClasses in the Label, and then uses a switch statement to turn on a specific PseudoClass depending on the value in the StringProperty.

One good thing about the way that PseudoClass is introduced in the JavaDocs is that it reaffirms that the designers of JavaFX intended it to be used as a Reactive framework. You can tell this because they take care to explain it in the context of a BooleanProperty embedded into a Node.

To be perfectly fair, though, the second sentence in the JavaDocs introduction is a complete and concise summary of everything in this tutorial:

Introducing a pseudo-class into a JavaFX class only requires that the method Node.pseudoClassStateChanged(javafx.css.PseudoClass, boolean) be called when the pseudo-class state changes.

However, everything else in the JavaDocs makes it very difficult to believe it could be that simple. Hopefully this tutorial has cleared that up.

Dialogs are the basic tools for interacting with the user in a controlled way as part of a procedural flow. They are best thought of as a way to collect and return information from the user.

Here’s some basic information that everyone needs to understand before they can start building screens with JavaFX…The layout classes and how they are used.

Need to understand a Kotlin program, but you only know Java? This article should give you everything you need to know to get started.

EventHandlers, Listeners and Bindings - What to Use Where

Taking a look at how EventHandler, Listeners and Bindings are different, and how they should be used in a JavaFX application.